The distinguished gentleman with the slightly plump face and David Niven moustache, seemed to harbour no doubts: ‘Yes, the location was magnificent. This area,’ he exclaimed, ‘could quite easily give birth to Europe’s finest golf course.’ Adding however, ‘the finest course that is, outside of the British Isles!’
Visiting the site he was immediately struck by the fact that there, on the Serra plateau, everything was already in place. His task would be to ‘simply’ add a few finishing touches to the already purposemade
landscape, with its undulations, rolling fields and sparse trees, thus shaping and giving definition to the 18 holes that mother nature seemed to be hiding in the undergrowth.
And so it was that Franco Bocca, Angelo Guabello and Franco Buratti, seated with this gentleman on a grassy knoll atop the Serra in the dying embers of the winter of 1956, were extremely satisfied with the reassuring words of English golf course designer John Stanton Fleming Morrison. Words which gave merit to months of passionate research by way of which over 70 hectares of the surrounding fields, woods and dells had been ‘obtained’ from around 170 landowners of the village of Magnano and the surrounding hamlets.
The aforementioned trio sat with Mr Morrison, represented the Golf Club Biella Le Betulle Association established on September 18, 1956; and on October 12 of the same year the first plots of land were acquired.
At that time in Italy there were just eleven 18hole courses, and only 43 players with a handicap of seven or less. Golf was talked about as a sport, or rather a pastime, simply for snobs.
At 65 years of age Morrison (1892-1961) was considered one of the world’s leading figures in course design. In 1920 he had been invited to join Colt and Alison one of the top golf architect firms of the age.
Harry Colt (1869-1951) was heralded as a course design genius. In 1913 he had collaborated with George Crump in shaping Fine Valley which, for a long time, was regarded as the fmest golf course in the world.
So when Morrison set about to design the course at Biella, he was a mature and expert draughtsman. His portfolio included golf design milestones such as Royal Lytham and St Annes, Sunningdale, Wentworth East and West, Royal Dublin, Royal Troon, Eindhoven, Kennemer, Royal St Cloud and Falkenstein to name but a few. At Biella work got under way in October of 1957 and carried on under Morrison’s supervision until September 1960 when the architect was no longer able to continue due to a deteriorating heart condition. Working alongside Morrison, and then continuing his work after his enforced retirement, were Donald Harradine and John Dering Harris. Harradine, known as the ‘wizard of grass’, supervised the completion of the greens, tees and fairways. Dering Harris took about redesigning a few greens during the spring and summer of 1967 and also made several suggestions for improving certain hole layouts.
Meanwhile construction had also begun on an elegant Olde Countrystyle clubhouse with adjoining guest rooms, a project left in the capable hands of architects BerardiRossi with offices in Florence and Rome.
Taking shape and slowly assuming its identity was the club described 40years later as, ‘A beautiful golf course set on a superior piece of land by a master architect,’ in the words of Michael J. Hurdzan, himself a master architect, voted in 1998 as Best Course Designer Worldwide the ‘Oscar’ of his profession.
Gene Sarazen, a phenomenal player and winner of more than any champion could dream of winning including ali four Majors US Open, USPGA, British Open and the US Masters inserted Biella on page 62 of the tome ‘Golf New Horizons: the Pan Am’s guide to golf courses around the world’, an accolade acknowledging Biella as a course not to be missed. Biella’s course over the years has pitted itself against the finest domestic and international golfers. It has all the characteristics to challenge champion golfers while also setting a fair test for every level of player. It proves to be both beautiful and difficult. It is an excellent testingground for players of every ability. Even the charm of its environment plays a prominent role in enchanting its guests. Since its conception the club has carefully paid heed to the evolution of international golf, responding to all the challenges…including that of the unstoppable passage of time. It has maintained its prestigious position on the European stage while retaining its role as a Constant point of reference within Italian golf.
During the 24 years in which the magazine Mondo del Golf has compiled its table of ‘The 10 Best Courses in Italy’, Biella has been awarded first place no less than 18 times and has never been ranked outside the top three. Indeed world golf s most prestigious magazines and guides bave constantly included Le Betulle among the leading golf courses. 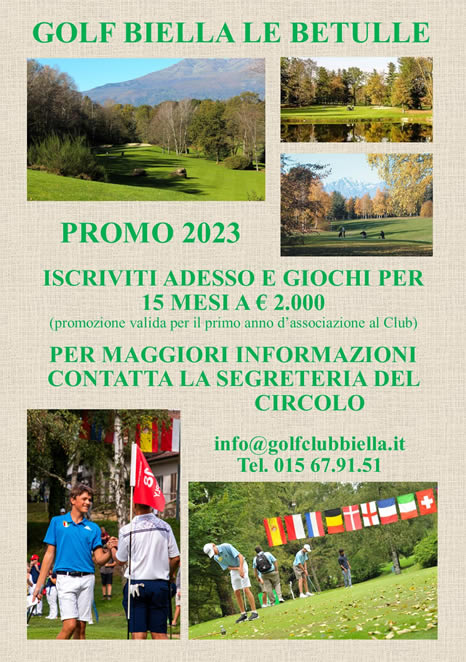 This site uses technical and third-party cookies: MORE INFORMATION Manage, activate and remove them You can manage them freely. Settings Close

The statistics are activated anonymously and without data sharing

active, the cookies have received consent to use
inactive, the service and its cookies are blocked
Go to Top